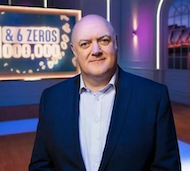 The Scottish broadcaster grew 35% over the 12 months to 31 December, up from £107m generated the previous year.

More than one-third (36%) of the profit came via its digital and STV Studios (STVS) divisions, with the group on track to reach its target of generating 50% of profits from non-traditional broadcasting by 2023.

STVS enjoyed its most successful year as revenue trebled to almost £27m, from £8.7m the previous year, buoyed by 35 new and returning commissions. It returned an operating profit of £1.3m, from a £300,000 loss the previous year.

As part of its growth, it has acquired a minority stake in Impossible producer Mighty, which is overseen by managing director Lynn Sutcliffe. Headquartered in London, the indie has a Glasgow office which is responsible for forthcoming C4 global format fund gameshow One & Six Zeroes, fronted by Dara O’Briain.

It becomes the ninth label to join the STVS stable.

STVS also extended its development and co-production deal with Tod Productions, signed in 2017, for a further three years.

STV chief exec Simon Pitts said it has been an “exceptional” year of growth.

“Our strategy of creating a more diversified media business through a relentless focus on digital streaming and production growth is delivering,” he said STV’s chief executive officer Simon Pitts.

“2022 has started well with a strong advertising performance in the first quarter, and we also have particularly good revenue visibility in Studios. 2022 will be our biggest year yet in terms of content.”